from Wisconsin Academy of Sciences

Photons give cells energy, plus a whole lot more. 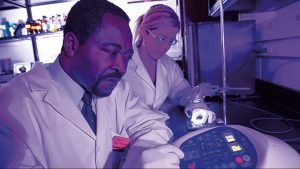 What if there was a way to treat debilitating diseases without drugs or surgery? What if chronic injuries could be healed with the application of something as ubiquitous as light?

Scientists have known for years that some wavelengths of light in certain doses can heal tissue, but they are only now uncovering exactly how light accomplishes its therapeutic effects.

Known as phototherapy, the use of light in medical treatment is producing surprisingly successful results in the treatment of a variety of ailments from topical infections and chronic wounds to autoimmune and chronic degenerative diseases, says Chukuka S. Enwemeka, dean of the University of Wisconsin–Milwaukee’s College of Health Sciences. Enwemeka, who is internationally known for his work in phototherapy, is one in a cluster of scientists at UW–Milwaukee (UWM) conducting studies in this emerging field of medicine.

Light is energy, a kind of radiation consisting of photons whose individual energy levels correspond to specific wavelengths. On the electromagnetic spectrum, light is arranged by wavelength along with other forms of energy, including gamma rays, microwaves, and radio waves. White light, or the “visible spectrum,” exemplified by the sun or incandescent light bulbs, includes blue, yellow and red light and makes up only a tiny section of the electromagnetic spectrum. White light lies between ultraviolet radiation and near red and infrared radiation.

Determining the best wavelength for phototherapy is a difficult task, says Jeri-Anne Lyons, a UWM associate professor of biomedical sciences. “[We use] only certain wavelengths, at a certain intensity, for a certain amount of time.” 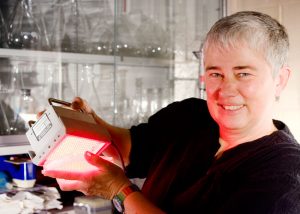 Studies show that though red to near-infrared light covers wavelengths of about 600 to 1100 nanometers (nm), the 670 nm and 830 nm wavelengths are the most beneficial of the near-infrared (NIR) spectrum. Because light in these wavelengths can penetrate the skin and be absorbed by subcutaneous cells, it can act on wounds, internal injuries, and disease.

With so much success, why isn’t phototherapy being used more widely?

Lyons, for instance, has tested phototherapy as a method of controlling the severity of multiple sclerosis, an autoimmune disease that causes progressive paralysis—interrupting vision, balance, and even thought processes by destruction of nerve cells and the spinal cord.

But while the U.S. Food and Drug Administration has approved NIR light for the treatment of pain and depression as well as skin conditions like acne and psoriasis, the FDA has not yet approved it for wound healing or the treatment of diseases like multiple sclerosis.

Enwemeka agrees, but says that UWM research is moving phototherapy closer to mainstream acceptance. What the FDA is waiting for, he says, is confirmation from a large-scale clinical study before approving phototherapy for a wider variety of ailments. It’s something Enwemeka and his colleagues at UWM are determined to accomplish.